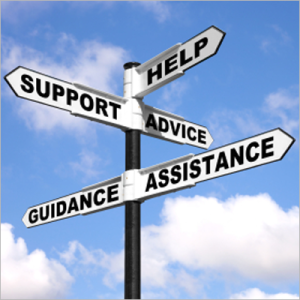 In last weekend’s post, I argued that there might be more efficient and meaningful ways of providing feedback than standard book-marking. As such, I have been experimenting with ‘gallery critique’, an idea gleaned from Ron Berger’s An Ethic of Excellence and David Didau’s excellent post on the strategy.

In truth, I have always been dubious of the claims made of peer-assessment, especially in essentially qualitative subjects such as English. However well – or badly – I train students to critique one-another, two nagging doubts have never ceased to plague me. First, a student is always always dependent on the ability and commitment of the person they are paired with – some children will receive poorer feedback than others. Second, students naturally place more trust in teacher-feedback than peer-feedback – and why shouldn’t they? My hunch has always been that the process of both reading each other’s work and getting down-and-dirty with success criteria is more useful than the feedback received from the process.

Gallery critique, however, is a much more seductive option because students receive feedback from a range of others. Once over, the useful feedback ‘wheat’ can be separated from the useless feedback ‘chaff’.

I am aware that many bloggers have written coherently about how they have used the strategy, but I thought I would share how I have been doing it as my early trials have been remarkably fruitful. This week I have tried the following structure with a top-set Y11 class on a Monday morning and a mixed-ability Y9 set on Tuesday afternoon.

Admittedly, I am a control freak in the classroom and mine is a very iron-fisted version…

1. In recent lessons, both classes had produced extended writing pieces: the Y9s a persuasive speech, the Y11s an answer to AQA English Language question 6. Before writing the pieces, I gave them a gentle heads-up that their work would be included in a critique. There was a noticeable sense of care in the products they were producing (see my post on taking pride in written work).

2. The students laid their work out at their tables. (My classroom is divided into six tables of four to six students.) The Y11s blu-tacked their work, the Y9s left open their books. A pile of post-its was made available.

3. Before we began, we talked through Berger’s mantra: kind, helpful, specific. I decided that I was going to give them sentence stems to help so that I could help guide their thinking. Having to think ‘what to say’ when trying to process what you have read, as well as keeping the success criteria in mind, is quite a challenge to the young working-memory. (Hence the stems.) 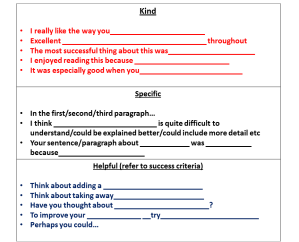 4. I took an exemplar paragraph from one student’s work, photographed it and modelled how to give feedback according to Berger’s mantra. We discussed why this kind of well-written, detailed feedback might be more subtle and successful than listing success criteria under the headings ‘what went well’ and ‘even better if’. The Y9 one – which needs a bit of work! – is below.

5. We recapped the success criteria and I ensured that these were printed out on each desk

6. I insisted on silence for the gallery critique itself. Both classes were extremely compliant and engaged in reading each other’s work – without a peep, in fact. They spent five minutes at each table, reading just one piece of work and writing their feedback on post-its. At the end of the session, each student had spent time reading five pieces.

7. The final task was to return back to their own work, to read the feedback and then filter it down to the most useful (which they did with a highlighter).

So how successful was it?

• Students received more feedback than I could ever give them through marking – and in more detail too.

• Students seemed intrinsically motivated in both classes. They clearly enjoyed it, even those who were reticent to start with. I had no complaints, even from the very weak handful in my Y9 group.

• In the best cases students gave very specific feedback – have a look below. In the worst cases it seemed too general – ‘sort out your spelling’ or ‘improve vocabulary’ were stock phrases.

• My classes clearly need more training in the language of critique. Modelling and sentence scaffolds helped direct thought, but many will need more practice if they are to make incisive comments.

• The most useful feedback was given by more-able students, yet the flip-side was the feedback they received themselves was less useful. In a mixed-ability class, I wonder if one of the teacher’s roles might be to ensure that they stick a few post-its themselves on the very best work so as to ensure that everyone receives something useful.

• The big question: does it match up to teacher feedback? Not quite at this stage, but it has the potential to. In my classroom, training students to trust one another’s judgements as much as a teacher’s will be part of the solution. How to identify good and bad feedback is another.

• The structure I am using is probably not as organic as the ‘art gallery’ style I imagine is used elsewhere; it is, however, very useful for creating the right conditions for reading and critiquing extended writing. I am quite excited about how this could be developed: as students carousel from table to table, I could ask them to hone in on certain areas of whple-class weakness.  This time I want you to look at how they have used sentence structures. This time concentrate on the effectiveness of endings…

I am excited about ways we might successfully bring feedback on extended writing more meaningfully into the classroom. Gallery critique, and the countless variations it offers, provides an intiguing option. Any strategy that might enhance student learning and simultaneously save me time is a strategy worth pursuing.

25 thoughts on “Adventures with gallery critique”